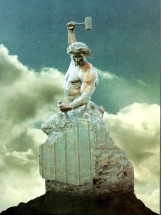 People living in the world today have a rough go of it. They spend their entire lives in conflict with an adversary they know not of, nor have any means to detect. They have at their fingertips uncountable volumes of information promising techniques, principles and solutions for every problem that could ever surface. There are rules to find happiness; “must do” activities for wellness and tips or clues for optimum prosperity and health. And, the information is so compelling that it supports a billion dollar industry almost all based on one grand illusion, namely that man can by his limited senses mind and decision-making, take full care of himself! He doesn’t need any outside help, but rather a resolute will and determination to make himself into something he is not yet. The allure is so compelling that the vast majority of people on Earth flounder under its spell. The self-made man is an illusion!

The last thing in the world that “the world” wants you to understand is that there is an entity opposed to all that is good or beneficial or kind, that takes full advantage of man’s ignorance concerning it. Evil has been deemed a label that man gives to forces he cannot see with his senses mind. It has been reduced to the level of superstition. It is generally a source of ridicule and a figment of the imagination by the so-called intelligentsia of the day. Yet absent a true spiritual understanding of evil and how it works incessantly to thwart mankind, man is forever the brunt of a cruel joke; one that plays out in his everyday existence. And you know, if you’re honest, that things often don’t turn out the way you had hoped they would. Instead apparently random circumstances and by chance events shape the life you are endeavoring to successfully live. On the other side of the same coin, there are those who see evil in every event and action and would have you to avoid the experience of life in its entirety. Both are fueled in ignorance of true spiritual realties.

Man’s unknown and somewhat typical experience consists of spending most days hoping he doesn’t get the unexpected roll of the dice that will lead to certain suffering ending in death. He is terrified of cancer or other deadly diseases and when hearing of evil that befalls another, makes up sayings to assuage himself like, “I guess it was his time.” And what incredulously cruel entity would decide when it was “his time?” The same one that lies hidden under the apparency of things according to the maxim, “the secret of its success is the secrecy of its moves.” Add to this, man’s ascribing these foul qualities to God and you have a recipe for a futile existence. For this reason, no man living, successful or otherwise, is self-made, but has knowingly or unknowingly tapped into something that either helped him or hindered him in his life. All that a man gets or fails to get is a product of his own beliefs. Being determined upon some goal and taking vigorous action towards it, leads to its acquisition, not by himself but in concert with all that is Good and gives unreservedly. Conversely, man fails and suffers hardship not by his fear alone, but rather by his ignorance concerning evil, and unable to successfully stand against it, he succumbs to a difficult life.

Life was never intended to be an obstacle course or a maze that could only be bested by years of “trying to get up that hill.” Instead man was supposed to seek out spiritual assistance to his spiritual problems from his spiritual source – God. God has not left His people without recourse. But, you’d never know that by studying the life of the average Christian today. It seems Christianity has been taken over wholesale by a preoccupation with sin. And in a man’s futile attempt to not sin, he sits ever open to the attacks from an enemy that not only entices him to sin, but accuses the holy bejesus out of him when he does sin. In this, the Christian is no different from the unbeliever in that he suffers pain from an enemy he cannot see nor discern by his ignorance of the truth. Working hard to be good enough or righteous enough is yet another endless puzzle with no real solution because the starting premise; you can by your own self-made efforts make yourself good enough, is categorically false as well.

God has given man remedies to his dilemmas, if he only knew it. The first and foremost remedy can be found in the Bible, also called God’s Word. God’s Word, specifically that part of His Word written to us directly, offers the truth concerning any apparent situation or dilemma we find ourselves in. To conclude that believing God for healing is foolish and that one is best served by the medical community is just another fault in a long line of faults, falsely setting up man and his wisdom as predominant over God’s wisdom. God’s Word is always paramount in our quest for truth. In addition to His Word, God made available holy spirit, obtained simply by believing (Romans 10:9-10). Receiving holy spirit, which some erroneously conclude resides in every man, enables man to once again be connected to God, the Holy Spirit. Holy spirit living within a man comes with built-in potential power. However, this fantastic power with the ability to overcome all difficulty and unlimited capacity to discern the spiritual world, must be energized within the man himself. This energizing within is accomplished by praying in the spirit, also called speaking in tongues. Typically, just the mention of speaking in tongues elicits a negative reaction in man’s mind. This shouldn’t surprise you as the source of all difficulty and hardship has worked tirelessly to queer the process and thus ensure that you don’t learn how to do it. Doing it and doing it often builds up His spirit within you. Once built up, man can once again see what he formerly could not see. He then not only has the ability to discern the evil, but also has access to God’s spiritual solutions for his spiritual problems. So very simple, yet so wholly misunderstood.

In the beginning, man was formed, made and created to live a life where God was at the center of his existence. He had responsibilities to accomplish, but his life was cared for by his God. And like a child seeks out his Mommy or Daddy to get his needs met, man was to seek out his Father to get his needs met as well. The self-made man is the ultimate ruse because man lacks the ability to self-make anything, though he demands otherwise. Instead man is a Spirit-made creation and absent God’s help has little to no shot of overcoming the world and it’s pain.

There is a wonderful, abundant life out there waiting for you, but you’ll never see it if you try to do it on your own. Spirit-made baby, that’s where real life is found!